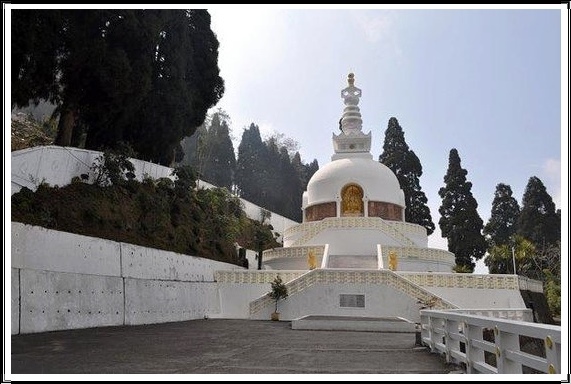 The Japanese Temple and Peace Pagoda in Darjeeling: An Ocean Of Peace

The Japanese Temple and Peace Pagoda in Darjeeling: An Ocean Of Peace.

If there is one monument that you should never miss seeing when traveling to Darjeeling, It is the Japanese Temple and Peace Pagoda. The Japanese temple remains restricted to tourism in Darjeeling and among modern unexplored Buddhist monuments in India.

Buddhism is slowly making its mark as a religion of universal acceptance worldwide. It is a religion conceived out of one man’s quest for truth and the reason for his own existence.  But even as the Lord Buddha professed a simple path, little did he realize how much his teachings would pave the way for countless interpretations that gave rise to several schools of Buddhism each with a philosophy of their own and entrenched in the several temples and schools located predominantly in India, Nepal, and Tibet.

I have always been fascinated with the teachings of Buddhism, and I have never experienced the peace and serenity of the religion more than in the atmosphere surrounding the beautiful Japanese Temple and Peace Pagoda in Darjeeling, North Bengal, India.

The Japanese Temple of Darjeeling

Around the world, only those related to the establishment and its Japanese connection will know that the Nipponzan Myohoji Buddhist Temple exists at a lofty height overlooking the hill station of Darjeeling and located at a 10 minutes drive from the town center. The quaint two-storied building built in 1972 has all the embellishments and décor of a traditional Japanese styled structure.

Without relevant information regarding the concept of the temple, one can never hope to identify with the spirituality of the building. The Japanese temple was built by the Nipponzan-Myohoji Daisanga. Simply known as the Nipponzan Myohoji, it is a relatively new Buddhist Japanese religious movement born out of Nichiren Buddhism and founded in 1917 by Nichidatsu Fujii.  The sangha is a small Japanese community who regards the Lotus Sutra as the highest expression of the concepts of Buddhism

One of the main activities of the Nippon Myohoji is to promote world peace and borrows the eternal chant of its parent the Nichiren Buddhist order which is Namu Myo Ho Renge Kyo which means Devotion to the Mystic Law of the Lotus Sutra or Glory to the Sutra of the Lotus of the Supreme Law.

The Walk of Peace

The chanting is accompanied by singular beats of a drum and it is this particular style of a single staccato sound that can be sometimes heard on the streets of Darjeeling when monks from the temple go about their routine walk around the town early in the mornings and back to the temple.  Around the world, monks of this order follow this routine as a prayer walk for peace. I have spent 6 years in Darjeeling and this scene has never failed to bring me a sense of calm and peace of mind.

An Air of Serenity and Spirituality Pervades the Japanese Temple

Upon entering the Temple, one cannot help but feel the tranquility of the silence that pervades through the atmosphere of the building. There is no guardian of the sanctum; no security and no officials or monks telling people what to do. It is left standing alone at peace with itself and it is the spirituality of its surroundings that reflects its trusting nature in tourists who are expected to respect the unmanned sanctuary, revere its holiness and absorb the positivity and spirituality of the ambiance.

The prayer room or inner sanctuary is on the first floor and is open throughout the day till 6.30 in the evening. Prayers are held at certain times and if you are lucky, you could join in by beating one of the handheld drums lying on the floor for those who wish to do so. That in itself is an experience that one cannot forget.

Lying in close vicinity to the Japanese temple is the large and dominating Peace Pagoda which was built as a symbol of world peace. The foundation stone of the Pagoda was laid in 1972 by the founder of the Nipponzan Myohoji movement, Nichidatsu Fujii a Buddhist monk from Japan.  It was completed and inaugurated on 1st November 1992 after three years of construction. The architect of the Peace Pagoda was Doctor M. Ohka of Japan.

The Darjeeling Peace Pagoda is the tallest structure in the area. As you climb up the stairs that feature two large lions on either side, you will find four large statues symbolizing the avatars of Lord Buddha including the Maitreya Buddha. These are gold polished statues that have been set into the walls of the main Stupa at four different corners. The height of the Pagoda is 94 feet with a diameter of 75 ft.

When you are at the top of the pagoda, you are expected to take a walk or Parikrama around the main stupa revering the avatars of Lord Buddha as well as taking your own walk as a prayer for world peace.

The pinnacle is carved beautifully and etched with stones and artwork that depicts the life of Buddha and his relics. The four avatars of Lord Buddha are the highlight of the Stupa and are shown in four different poses such as standing, sleeping, sitting and meditating.

Location: How to go to Japanese Temple Darjeeling

The Peace Pagoda and Japanese temple lie below Jalapahar and close to the LAL KOTHI a palatial building which is also the center of the local administration and a tourist attraction.  One can take a nice scenic walk from the town center to the pagoda which would take approximately 45 minutes. From the pagoda, you can get some awesome panoramic views of the Darjeeling landscape, the town, Sandakphu hill in the distance, and the mighty Kanchenjunga, the third highest mountain in the world.

How to go to Darjeeling

Darjeeling is a quaint hill station lying nestled in the lap of the mighty Kanchenjunga. It has a chequered history rich with culture and tradition right from the earliest days of the British Raj. There are several pleasant sightseeing spots in Darjeeling and the perfect time to visit the area is from April to 15th June and then again from October to 30th November.